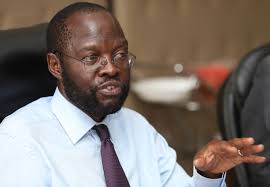 Senior Kisumu county officials who were allegedly hired without due process are earning hefty salaries. Some of them are earning over Sh200,000 per month.
The senior officers hired by Governor Anyang Nyong’o and his cronies without any interview process and are earning an average of Sh250,000 plus allowances include:

The county secretary is above the civil service age of 63 years old, earning government pension and a salary at the same time, and at the time of his appointment, he was still the CEC for health in Siaya.
Atieno Otieno whose father Jacob Otieno is Nyong’o’s brother and was running the communications department with her husband who is not a civil servant and Edward Omol and were sacked due to financial misappropriation have secretly been reinstated yet millions of shillings were lost.
Meanwhile, nepotism and favouritism have rocked the Kisumu county government with the appointment of senior staff members and casuals raising eyebrows.
Sources confided that the public service human resource manual is clear on procedures of recruitment of public service staff.

They said that Nyong’o’s administration exercise of hiring staff must be above board and carried out by the county public service board
The advertisement of a vacancy must be placed in at least two mass circulating newspapers after which applicants shortlisted for job interviews are done, the law states.
Suitability test must be carried out by the PSB for those who are directly appointed by the governor. The names of successful candidates the governor appoints ought to be made public.
“Appointment in acting capacity must be from within the working staff and must be done by the public service board and one can only act for a maximum of six months upon which either one is confirmed in that position or the position is advertised,” a worker said.
The county government of Kisumu has a huge number of workers earning millions of shillings but having not gone through the rigorous recruitment exercise.
Residents now want to know who appointed the tens of casuals at the executive and in the county hospitals.
Others whose appointments have raised concern include acting county secretary Olang’ Onudi.
Kisumu county has two sets of chief officers, the Nyong’o chief officers and the Jack Ranguma chief officers who were reinstated and are earning salaries. Next Story
Hailey Bieber admits she has ‘baby fever’