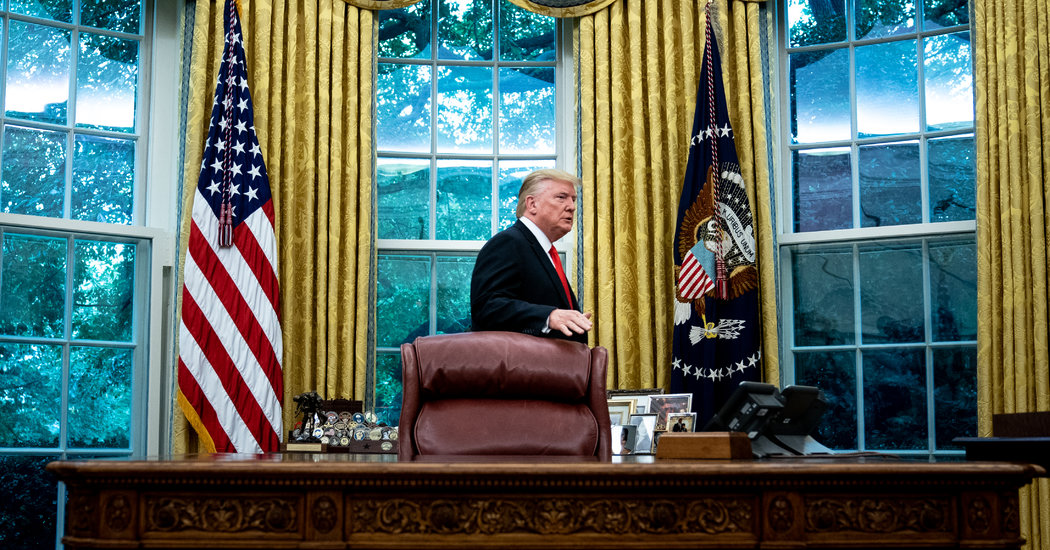 How the plan for Taliban talks fell apart

Late last month, President Trump met with advisers to consider what could be among the most profound decisions of his presidency: a peace plan with the Taliban after 18 years of fighting in Afghanistan.

Our reporters pieced together the ensuing negotiations, including an idea to bring Taliban leaders to Camp David just days before the anniversary of the Sept. 11, 2001, attacks that led to the war.

The plan divided Mr. Trump’s administration, and he announced the cancellation of the talks over the weekend, citing a Taliban attack last week that killed an American soldier.

What’s next: Each side blamed the other for the derailment but also left open the door to continue talks. There was also a consensus in Kabul and Washington that the collapse of negotiations could lead to a surge of violence before elections in Afghanistan this month.

The House Judiciary Committee plans to finalize a resolution today that would expand its investigation into President Trump beyond the findings of the special counsel’s Russia investigation.

On the agenda are Mr. Trump’s role in hush payments to women who said they had affairs with him, reports that he dangled pardons to immigration officials and whether his resort properties have illegally profited from government business.

The Democratic Party has been divided about the merits of opening impeachment proceedings, a move that has lackluster public support.

Related: The Air Force has ordered a review of personnel layovers after conceding that the decision to place a crew at a Trump resort in Scotland this year “might be allowable but not advisable.”

Another angle: Former Gov. Mark Sanford of South Carolina said on Sunday that he would challenge Mr. Trump for the Republican presidential nomination.

A bipartisan group led by eight attorneys general is expected to announce today an investigation of Google, according to people familiar with the plan.

It follows the start of an antitrust inquiry into Facebook, part of American regulators’ growing scrutiny of big technology companies.

Here are the arguments made by those who fear that too few companies have consolidated too much power, along with the companies’ responses.

Where the weapons are hashtags

Covert influence campaigns have become a favored tool in countries such as China and Russia, where the manipulation of social media accompanies strong-arm tactics on the streets.

But in the Middle East in particular, such tactics bolster authoritarian rule and tamp down the kind of protests that led to the Arab Spring in 2011. We looked at an obscure Egyptian company that racked up millions of followers with social media posts praising Sudan’s military.

The Weekly: The latest episode of The Times’s TV show is about Russia’s playbook for disrupting democracy. Read behind-the-scenes notes about the episode, which is available on FX and Hulu.

If you have 5 minutes, this is worth it

An effort to fight food waste

About one-third of the food packaged for human consumption is lost or wasted, according to the United Nations. Globally, 10 percent of people are chronically undernourished, and the wastefulness also contributes to climate change, scientists say.

More supermarkets, restaurants and start-ups — many based in Europe — are trying to confront the problem. A market in Finland, pictured above, discounts food that is nearing its expiration date.

Here’s what else is happening

Vote on Brexit deal: Legislation that would require Britain to seek another extension if there is no withdrawal agreement by Oct. 31 is expected to be approved today, a move that Prime Minister Boris Johnson has bitterly opposed. Here’s the latest.

After Hurricane Dorian: The official death toll in the Bahamas is 44, but there is no estimate of how many people are missing. Residents say the government has largely been absent.

M.I.T. official quits: Joichi Ito, the director of the Media Lab at the Massachusetts Institute of Technology, resigned after it was revealed that he tried to conceal financial connections to Jeffrey Epstein. Mr. Ito also left the boards of three other organizations, including that of The Times.

What we’re reading: Cathy Horyn’s introduction to “Bill Cunningham: On the Street.” “Ms. Horyn, who for many years was The Times’s fashion critic, offers a revealing context for a new collection of images from the archives of our beloved fashion photographer, three years after his death,” writes Andrea Kannapell, the briefings editor.

Now, a break from the news

Cook: Eggplant and zucchini pasta packs in two pounds of vegetables, and it’s ready in 20 minutes.

Go: Book your tickets to Belgrade, Lagos, London, Paris and São Paulo: Our art critic recommends 28 shows worth traveling for.

Listen: Camila Cabello’s song “Liar,” a canny Pan-Caribbean and Spanish mélange about uncontrollable desire, is on our critics’ playlist this week.

Smarter Living: It’s important to discuss cyberbullying with children. If it happens to them, take screenshots of the comments (include the website or app name in the image, and a picture of the commenter’s profile) and report it to school or other authorities. Also talk to children about what to do if they witness bullying: Don’t participate, do post a positive comment and do tell a trusted adult.

And a new study suggests that aerobic activity affects metabolism substantially more than weight training does.

And now for the Back Story on …

Britain is heaving over Brexit, and the pound is bouncing around near its historic low.

But those aren’t the only issues giving Britons a headache. In July, The Guardian reported that the food giant Unilever might be considering offloading Marmite, Britain’s much-loved (and much-hated) condiment.

In 1902, a German scientist, Justus von Liebig, accidentally discovered that a spread could be made from yeast extract, a byproduct of brewing beer. The spread, called Marmite, has been made in England ever since. (New Zealand makes its own version, and Australia has a similar product, Vegemite.)

The salty, dark paste is an acquired taste, often spread on buttered toast. Aficionados use it in everything — even desserts.

Its popularity was underlined in 2016, when there was a run on stores during a brief tiff between Unilever and the supermarket chain Tesco.

The latest concerns over Marmite arose after Unilever’s chief executive said in June that the company would retain only brands that “have a purpose” — meaning, he said, those that “take action and demonstrate their commitment to making a difference” on social or environmental issues.

That’s it for this briefing. See you next time.

Thank you
Mark Josephson and Eleanor Stanford provided the break from the news. Wadzanai Mhute wrote today’s Back Story. You can reach the team at briefing@nytimes.com.

P.S.
• We’re listening to “The Daily.” Today’s episode is about the challenges facing Prime Minister Boris Johnson of Britain.
• “The Birth of American Music” is the third episode in our 1619 Project’s audio series.
• Here’s today’s Mini Crossword, and a clue: What many a pointless meeting really should have been (five letters). You can find all our puzzles here.
• The Times released a new ad during the U.S. Open focused on women’s quest for pay equity in sports.

Next Story
British Airways cancels nearly 100 per cent of its flights : The Standard