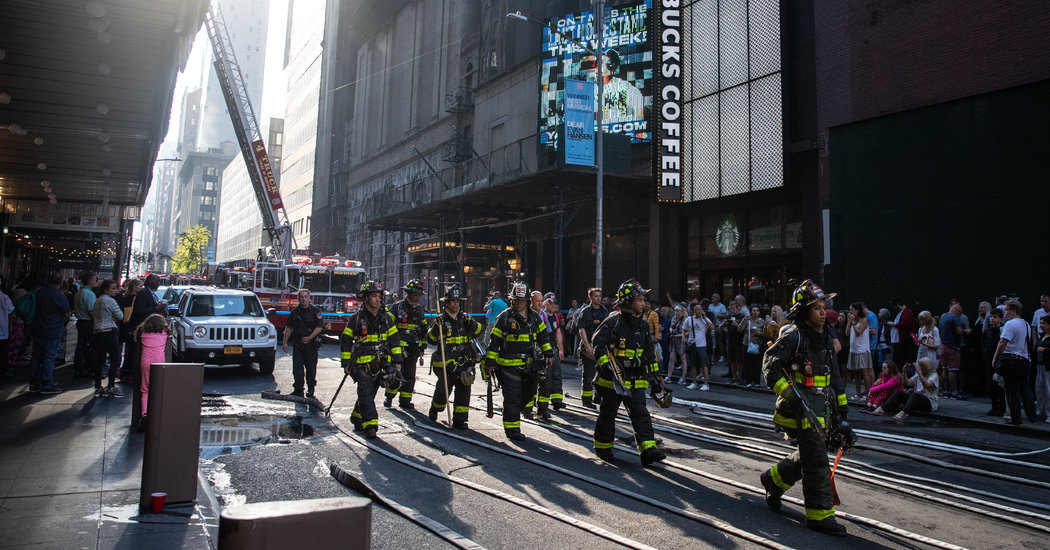 A smoky fire at the Hyatt Times Square on West 45th Street prompted the evacuation of guests on Sunday morning.

The fire, which was reported about 7:40 a.m., started in duct work in the kitchen of O’Lunney’s Restaurant and Bar next door to the Hyatt, Battalion Chief Tom Meara said.

The cause of the fire, which was out by 8:50 a.m., was under investigation.

A representative of the hotel could not immediately be reached.

Linda Lawrence, a guest, stood outside the hotel, barefoot.

Ms. Lawrence, of Plymouth Meeting, Pa., was visiting New York for one night and was on the 49th floor of the hotel with her husband and two daughters, Charlee, 7, and Kayce, 7, when the fire alarm sounded, she said.

“We ignored it because there are so many false alarms,” she said.

Her daughters looked out the window and saw heavy billowing smoke, she said. It smelled like burning rubber.

They made their way down 49 flights of stairs.

“It’s tough because they’re slow and they’re scared,” she said of her daughters.

Some guests were especially kind and offered to help carry the girls while others pushed them out of the way, she said.

She said the evacuation was well organized, though.

The family was visiting New York for the first time to celebrate Charlee’s birthday and wanted to stay on a very high floor of a hotel.

“Welcome to New York,” she said, with a laugh.