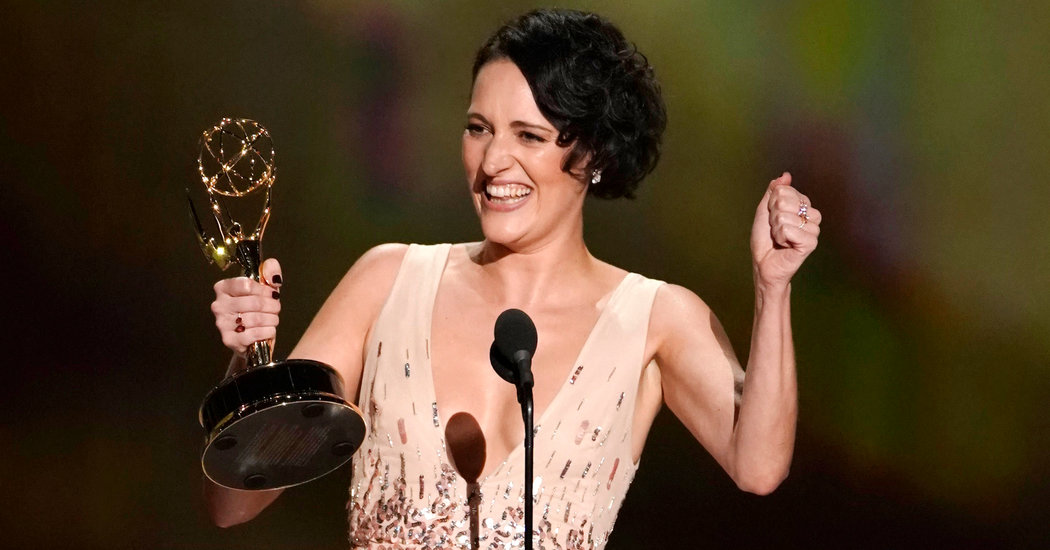 Big wins for the Amazon shows ‘Fleabag’ and ‘Mrs. Maisel’

Within the first hour of the 71st Emmy Awards, two comedy series from Amazon had picked up five awards, with three going to “Fleabag” and two to “The Marvelous Mrs. Maisel.”

Her win in the acting category came as an upset. The award was widely expected to go to Julia Louis-Dreyfus, the much-decorated star of HBO’s “Veep.”

Louis-Dreyfus had won six Emmys for her role as Selina Meyer, the most wins by an actor in a single role. Had she won again on Sunday, she would have set the record for most acting wins at the Emmys. Instead, she continued to share the record with Cloris Leachman.

Sandwiched between Ms. Waller-Bridge’s two wins was another nod for “Fleabag,” when Harry Bradbeer took the prize for best directing for a comedy series.

Tony Shalhoub won the ceremony’s first award, for best supporting actor in a comedy for his role on Amazon’s “The Marvelous Mrs. Maisel.” It was his fourth Emmy — he previously won three as the star of the USA show “Monk.”

One of his co-stars on “The Marvelous Mrs. Maisel,” Alex Borstein, followed up with a win for best supporting actress in a comedy for a second year in a row.

Ben Whishaw won for best supporting actor in a limited series for “A Very English Scandal.”

And in keeping with Amazon’s dominance in the first hour of the show, even Alexa made an appearance. She presented the nominees for best actress in a comedy, as part of a bit from Stephen Colbert and Jimmy Kimmel, who presented the award.

“Game of Thrones,” the favorite in the drama category, earned more Emmy nominations than any other show in TV history this year. If it does take the big prize, it will tie series like “The West Wing,” “L.A. Law,” “Mad Men” and “Hill Street Blues” for the most wins for best drama.

And yet there’s the pesky matter of that final season. Critics and fans had issues with its head-snapping plot twists, dramatic character shifts and hasty resolutions. Will that hurt the show’s chances? If so, could another HBO series, “Succession,” play the role of spoiler?

After 10 nominations, an Emmy for Sandra Oh?

Sandra Oh has been nominated 10 times, eight for her work as an actor, but has yet to win an Emmy. Will her luck change tonight?

Oh is nominated for the second straight year for her performance as an investigator in BBC America’s “Killing Eve.” She’s the favorite this year — narrowly ahead of her co-star, Jodie Comer — and if she wins, she will make history by being the first woman of Asian descent to take home the Emmy for best actress in a drama.

HBO’s “Chernobyl” took home the Emmy for best limited series. That show, about the 1986 nuclear reactor disaster in the Soviet Union, edged Netflix’s “When They See Us,” a series from the filmmaker Ana DuVernay about the Central Park Five, who were wrongfully convicted and sent to prison as teenagers for the 1989 rape and assault of a jogger in Central Park.

“Chernobyl,” a series that appeared on HBO last spring with not much fanfare, turned out to be a critical darling. It won a total of three Emmys on Sunday: Craig Mazin, the show’s creator, took the award for best writing, and it was honored for directing as well.

With the Emmys’ habit of rewarding the same shows in drama, variety and comedy year after year, the limited series category has become the ceremony’s most intriguing. And with little chance of winning in other major show categories, Netflix was holding out hope that it would prevail with DuVernay’s show.

While it did not take the best limited series award, DuVernay’s “When They See Us” still made an impression on Emmy voters. Jharrel Jerome won for best actor in a limited series for his role as Korey Wise, the eldest of the five. The actual Central Park Five were in attendance at the Microsoft Theater, and they leapt up from their seats when Jerome got the win.

The actor thanked his mother and DuVernay, adding: “But most importantly, this is for the men we know as the Exonerated Five.”

Beneath the competition between “When They See Us” and “Chernobyl” in the limited series category was the heated Emmys rivalry between HBO and Netflix. The scoreboard was already lit up after last weekend’s Creative Arts Emmys, where HBO won 25 Emmys and Netflix got 23.

HBO had won the most Emmys for 16 years in a row until last year’s ceremony, when HBO and Netflix tied for the lead, with each taking home 23. If Netflix outscores HBO on Sunday, it will have passed another marker in its rapid ascent in Hollywood.

Going into the Emmys ceremony, HBO led all networks (and platforms) with 137 nominations — well ahead of Netflix, the runner-up with 117. Since ending up in a tie with Netflix at last year’s Emmys, HBO executives have quietly vowed that their network would finish first this time.

There was a series of host handoffs at the top of the show.

The Emmys broadcast is losing viewers, having dropped to a new low of 10.2 million last year. In an attempt to shake things up, it went without a host for the first time in 16 years.

Fox, the network for this year’s show, didn’t have a late-night host or sitcom star who was a natural fit for the job.

Instead of an opening monologue, there was a series of handoffs at the top of the show. Homer Simpson, a three-decade Fox veteran, stood center stage before Anthony Anderson, a star of ABC’s “black-ish” took over — and then Bryan Cranston delivered a sincere speech about television’s cultural impact.

Producers used the extra time to pay tribute to several shows that went off the air this year. The casts of “Game of Thrones” and “Veep” took the stage. There was a farewell video that honored other outgoing series like “House of Cards,” “Broad City” and “The Big Bang Theory.”

The producers made other changes meant to keep the audience involved. The traditional red carpet was traded in for a purple carpet, and the orchestra was sent packing from the Microsoft Theater, replaced by piped-in pop songs.

The Oscars broadcast went without a host this year and had a ratings increase, with nearly 30 million tuning in.

Part of the reason there was no host was pure logistics. Fox, the network for this year’s show, doesn’t have a late-night host or sitcom star who would be a natural fit for the job. The last time Fox broadcast the Emmys, in 2015, it turned to its “Brooklyn Nine-Nine” star Andy Samberg. That show was canceled by Fox last year — and is now part of the NBC lineup.

The Oscars broadcast went without a host this year and had a ratings increase, with nearly 30 million tuning in.

More than 7,000 television and movie writers are in a bitter standoff with their former talent agents five months after having cut ties with them en masse on the advice of the Writers Guild of America unions. Amid the acrimony, the four major agencies canceled the Emmys parties they usually host this weekend.

It’s a three-way race for best actor in a drama.

It’s hard to predict the winner of the best actor in a drama category, but whoever takes the Emmy is likely to be a first-time winner. The race is shaping up to be a three-way showdown. Billy Porter, a breakout star from FX’s “Pose,” goes up against Bob Odenkirk, of “Better Call Saul,” who has won two writing Emmys but none for acting, and Jason Bateman, the star of Netflix’s “Ozark,” who has been nominated three times as an actor.

In the best actor in a comedy category, Bill Hader won for a second straight year for his role as the tortured hit man on HBO’s “Barry.”