The Amelia Earhart Mystery Stays Down in the Deep 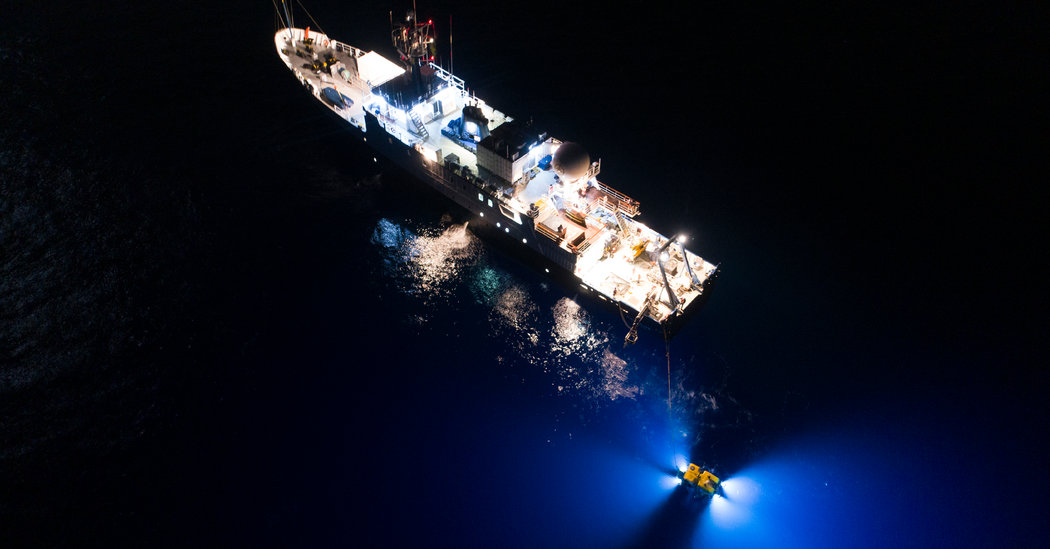 For two weeks in August, a multimillion-dollar search from air, land and sea sought to solve the 80-year mystery of Amelia Earhart’s disappearance.

Robert Ballard, the ocean explorer famous for locating the wreck of the Titanic, led a team that discovered two hats in the depths. It found debris from an old shipwreck. It even spotted a soda can. What it did not find was a single piece of the Lockheed Electra airplane flown in 1937 by Amelia Earhart and Fred Noonan, which vanished during their doomed voyage around the world.

Dr. Ballard and his crew don’t consider it a failure. For one thing, he says, they know where the plane isn’t. And in the process, they may have dispensed with one clue that has driven years of speculation, while a team of collaborating archaeologists potentially turned up more hints at the aviator’s fate.

“This plane exists,” Dr. Ballard said. “It’s not the Loch Ness monster, and it’s going to be found.”

Dr. Ballard had avoided the Earhart mystery for decades, dismissing the search area as too large, until he was presented with a clue he found irresistible. Kurt Campbell, then a senior official in President Barack Obama’s State Department, shared with him what is known as the Bevington image — a photo taken by a British officer in 1940 at what is now known as Nikumaroro, an atoll in the Phoenix Islands in the Republic of Kiribati. American intelligence analysts had enhanced the image at Mr. Campbell’s request, and concluded a blurry object in it was consistent with landing gear from Earhart’s plane.

Motivated by this clue, and by 30 years of research on Nikumaroro by the International Group for Historic Aircraft Recovery, Dr. Ballard and his crew set a course for the island in August. They were joined by archaeologists from the National Geographic Society, which sponsored and documented the journey for “Expedition Amelia,” which will air on the National Geographic Channel on Sunday.

Dr. Ballard and Allison Fundis, the Nautilus’s chief operating officer, coordinated an elaborate plan of attack. First, they sent the ship five times around the island to map it with multibeam sonar, and deployed a floating autonomous surface vehicle to map shallower areas off the island’s shore. They also used four aerial drones for additional inspections of the surrounding reef.

Nikumaroro and its reef are just the tip of a 16,000-foot underwater mountain, a series of 13 sheer escarpments that drop off onto ramps, eventually fanning out at the base for six nautical miles

If Earhart crashed there, they believe, rising tides would have dragged her plane over the reef, and down the escarpments. Fragments should have collected on the ramps, especially heavier components like the engine and the radio.

In deeper water the team deployed the Hercules and the Argus, remotely operated vehicles equipped with spotlights and high-definition cameras. These robots descended 650 feet around the entire island, and found nothing.

At that point, the crew focused on the northwest corner of the island near the S.S. Norwich City, a British freighter that ran aground on the island in 1929, eight years before Earhart’s disappearance. That is the area where the Bevington photo was taken.

While they searched there, crew members found so many beach rocks consistent in size and shape with the supposed landing gear in the Bevington image that it became a joke on the ship.

Ms. Fundis said, “We felt like if her plane was there, we would have found it pretty early in the expedition.” But she said they kept up their morale because Dr. Ballard reminded them that it took four missions to find the Titanic, and that one of those expeditions missed the ship by just under 500 feet.

The crew mapped the mountain’s underwater drainage patterns and searched the gullies that might have carried plane fragments down slope, to a depth of 8,500 feet. Crew members even searched roughly four nautical miles out to sea, in case the plane lifted off the reef intact and glided underwater as it sank.

Each time a new search tactic yielded nothing, Dr. Ballard said, he felt he was adding “nail after nail after nail” to the coffin of the Nikumaroro hypothesis.

Still, Dr. Ballard and Ms. Fundis confess that other clues pointing to Nikumaroro have left them with lingering curiosity about whether Earhart crashed there. For instance, Panamerican Airway radio direction finders on Wake Island, Midway Atoll and Honolulu each picked up distress signals from Earhart and took bearings, which triangulated in the cluster of islands that includes Nikumaroro.

For years, many Earhart historians have been skeptical of the Nikumaroro theory. And Dr. Ballard, Ms. Fundis and their team’s return to the island will now depend on whether the archaeologists from the National Geographic Society came up with evidence that Earhart’s body was there.

Fredrik Hiebert, the society’s archaeologist in residence, has some leads. His team awaits DNA analysis on soil samples taken at a bivouac shelter found on the island.

The camp, known as the Seven Site for its shape, was first noticed by a British officer in 1940. Thirteen bones were gathered then and sent to a colonial doctor in Fiji, who determined they belonged to a European man. The bones were subsequently lost.

Decades later, the International Group for Historic Aircraft Recovery, or Tighar, tracked down the doctor’s analysis. Richard Jantz, director emeritus of the Forensic Anthropology Center at the University of Tennessee, determined that the bones most likely belonged to a woman, and that Earhart’s build was “more similar to the Nikumaroro bones than 99 percent of individuals in a large reference sample.”

Since the 1980s, Tighar has conducted 12 expeditions to Nikumaroro in an effort to find more skeletal remains. It turned up other items from a castaway’s existence at the camp, but never any bones or DNA.

Dr. Hiebert’s team is hoping to use new techniques to identify evidence of mitochondrial DNA with similarities to Earhart’s living relatives in the 22 soil samples they collected.

Before the expedition, Dr. Hiebert and Erin Kimmerle, a forensic anthropologist, visited the National Museum in Tarawa, Kiribati’s capital. On an unmarked shelf, Dr. Kimmerle spotted remnants of a female skull. The team now awaits DNA analysis of the specimen.

In 2021, the Nautilus will be in the South Pacific fulfilling a contract to map underwater American territories. That will bring the ship to the area around Howland Island, Earhart’s intended destination for refueling before her plane disappeared. Dr. Ballard and Ms. Fundis plan to make time to explore the alternate theory favored by some skeptics of the Nikumaroro hypothesis: that Earhart crashed at sea closer to Howland.

Ms. Fundis considers Earhart a role model, which gives her the “fuel to keep going,” she said. And Dr. Ballard explained his own motivation to continue the search.

“In many ways, I’m doing this for my mother,” he said, describing her as a “brilliant woman” who grew up in Kansas, like Earhart, but dropped out of college to raise three children and care for her sister.

His mother, Hariett Ballard, admired Earhart, and hoped she might pave the way for her children, or perhaps grandchildren, to pursue adventurous careers. Dr. Ballard’s daughter, Emily Ballard, was among the crew of the Nautilus, hunting for Earhart’s plane. Previous Story
Kenya’s inflation falls to 3.83pc, the lowest in more than a year
→

Next Story
National Cement takes over ARM ahead of lawsuit