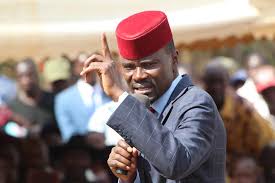 Sirisia MP John Waluke and Lwandanyi ward MCA Tony Barasa do not see eye-to-eye following a fallout.
The two leaders elected on Jubilee ticket are embroiled in a political tussle that is likely to break the party in the region.
Barasa is accusing the lawmaker of belittling and using obscene language against him as a way of endorsing somebody to replace him in 2022.
While addressing mourners during the burial of Clement Omasaja Simiyu, Waluke referred to the ward leader as a young boy who has failed in his representation duties.
“This boy is not serious. Why did you elect a youth who is busy marrying and hiding a woman in Eldoret town? He no longer represents you but is busy pampering his new catch in the foreign land,” said Waluke.

The legislator asked Lwandanyi voters to vote in a mature leader in 2022 if they need any development in their ward or else they will continue suffering for long if they keep on electing youths.
However, a furious Barasa responded to Waluke by asking him to stop cheap politics but instead help area residents.
“I’m perturbed by the statement made by our area MP John Waluke against my person. He should understand that we were all given the leadership mandate by the voters and this issue of us fighting each other will slow down our planned development initiatives. Let him style up and let’s engage maturely,” he said.
He said that he had attended the county assembly sports association for the last 10 days and had not married another woman as alleged.
Barasa called on the area legislator to step down and prepare to vie for Lwandanyi’s ward seat if he feels that by belittling him he will have an easy ride to endorse somebody against him.
“I don’t play in his league. Let him prepare for a tough battle a head. He can’t be moving everywhere tainting my name so that he endorses somebody else. Let him work for the sake of our people,” said Barasa.
Waluke was allegedly replaced by Kimilili MP Didmus Barasa as Bungoma county Jubilee chairman in a coup that brought a cold working relationship between the two leaders.
However, Waluke strongly came out and refuted to the claims that he had been replaced calling it a child story that should not be taken seriously.